Review: News of the World 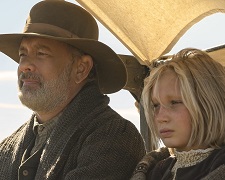 Today’s news can be read online by holding a tiny electronic device in your hand.  In the 1950s, you could watch nightly national newscasts on TV and if you were around in the 1920s, you could stay informed by listening to bulletins on your local radio station.  News of the World takes us back to the year 1870 where there was only one reliable method to broadly inform the masses – newspapers.

Jefferson Kidd (Hanks) isn’t a journalist, a publisher or a salesman but he’s been able use the medium to make a meagre living.  He collects newspapers from across the country and relays the key stories in town halls to those with “10 cents and the time to hear it.”  When he reads good news tales, the folk cheer excitedly.  When he reads bad news or starts talking about national politics, jeers drown out his voice.

It may sound like an odd occupation but it’s of huge benefit to small towns.  Their residents can’t afford and/or don’t have access to a wide range of newspapers and further, this was a time in the United States when 20% of the population was illiterate.  Kidd enjoys the spotlight but it’s still a tough profession.  The pay is poor, the journeys are lonely, and the roads are dangerous.  It’s a step down from his previous role as a captain in the Confederate Infantry during the American Civil War.

It’s on a routine trip through Texas that Kidd comes across a horrific scene – a lynched black man, a destroyed carriage, and a scared 10-year-old orphaned girl named Johanna (Zengel) who cannot speak English. Realising there’s no one else who cares enough to help, Kidd takes it upon himself to care for the girl until she can be reunited with her long-lost aunt and uncle.  They travel across Texas together and become entangled in a series of life-threatening situations.

An outstanding Tom Hanks looks like he’s been wearing the shoes of Jefferson Kidd his whole life.  There’s a tiredness in his eyes and some scar tissue in his mind but he’s still trying to live a fruitful existence and make the world a better place.  This is evident when you see the news stories he selectively chooses to read (subtly shaping debate) and the way he cares deeply for Johanna.  It’s not a flashy performance but Hanks has created an interesting character worth rooting for.

Oscar nominated director Paul Greengrass (United 93) excels in capturing 1870s America.  The rocky landscapes are beautiful to look at but difficult to travel across.  The people vary from educated lawyers to racist hicks refusing to accept the result of the Civil War.  It’s all on display thanks to the cinematography of Dariusz Wolski (The Martian) and a well-chosen group of supporting actors.  Australian Luke Davies (Lion) also deserves a shout-out in working with Greengrass to adapt Paulette Jiles’ novel for the screen.

The biggest takeaway is the performance of 12-year-old newcomer Helena Zengel as Johanna.  She hardly speaks throughout the entire film and yet we still feel the impact of Johanna’s troubled upbringing and we still understand her confusing search for a sense of family and identity.  Zengel will be a name to watch in the future.