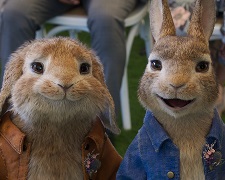 As I often say when looking at a movie like this through a child’s eyes – “they’ll have fun with it.”  There are rabbits, hedgehogs, toads, ducks, badgers, rats, pigs and deer.  They talk, they have cute expressions, and they make mischief.  In the film’s best scene, they team-up and execute an elaborate plan to steal dried fruit from a farmer’s market.  Kids will enjoy the chaos and mayhem created from such an event.

Looking at it broadly and comparing it to other family-targeted offerings in recent years, Peter Rabbit 2 underachieves.  It’s the script which is to blame.  The first film, released in March 2018, was a well-thought out adventure with jokes on offer for all ages.  Its key theme was also memorable – we shouldn’t broadly categorise people as “good” or “bad” as there’s a lot of greyness in between.

Peter Rabbit 2 is more muddled in what it’s trying to say.  Despite Peter Rabbit (Corden) and farm owner Thomas McGregor (Gleeson) resolving in their differences in the original flick, returning writer-director Will Gluck (Easy A) has tried to create tension between the two once again.  It doesn’t work this time around with Thomas seemingly having a different view about Peter in every scene.  Faux drama is created such as sequence where Peter is falsely accused of stealing Thomas’s prized tomatoes.

The least interesting subplot involves Bea McGregor (Byrne) writing a book about Peter Rabbit and his friends and having it picked up by a major publishing house.  Its manager, Nigel Basil-Jones (Oyelowo), wants to turn it into a profitable franchise by having Bea “spice up” the characters and sending them on crazy adventures into space.  Bea is worried this will betray the essence of her beloved rabbits but at the same time, more book sales will allow her to save more land from development in her small town.  To be blunt, I couldn’t care either way.  I don’t think kids will understand either.

The better stuff in the film is where the humans are pushed aside and we focus solely on the animals and their problems.  Peter befriends a thieving, city-based rabbit named Barnabas (James) who has some creative approaches to finding food.  Thinking he’s not appreciated enough on the McGregor farm, Peter becomes part of Barnabas’s friendship group but he’ll soon learn the grass isn’t always greener on the other side.

The release of Peter Rabbit 2 has been delayed a year due to impact of COVID-19 but it finally arrives in Australian cinemas in time for the Easter school holidays.  A few jokes hit the mark (I liked the one about recycling coffee cups) but this lacks the engaging narrative that made the first movie so much fun.