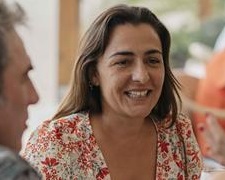 Underappreciated – it’s a feeling we’ve all experienced in varying degrees.  It’s certainly front of mind for the title character in this new Spanish comedy from director Icíar Bollaín (Take My Eyes, The Olive Tree).  Rosa (Peña) is a 45-year-old single mother/grandmother who has given up so much helping others, she never has any time to invest in her own health and well-being.

A reason she is so often called upon is because she isn’t married and lives alone.  When her brother (Armando) is spending late nights in the office, he gets Rosa to look after his kids, make them dinner, and get them to bed on time.  When her widowed father (Barea) needs to go to medical appointments, Rosa is always the one called upon because her other two siblings use dubious excuses to indicate they’re “too busy”.

The same applies at work where Rosa is a costume designer for locally made films.  She gets minimal pay and is seldom recognised for the immensely long hours put in to make sure every costume looks right and fits perfectly.  She’s long dreamed of opening her own clothing design business but she lacks the start-up capital and support to get it off the ground.

Rosa’s supressed frustration finally comes out into the open when she makes a life-changing decision – to get married.  There’s a catch though.  She’s not marrying anyone else but rather, she’s marrying herself.  It’s her unique way of taking a vow and promising to put her own wants and desires above others for once.

The strongest comedic elements in the film stem from the fact Rosa hasn’t told her close family about the idea.  They’ve assembled at a seaside Spanish town thinking she’s marrying some guy they’ve vaguely heard about.  Rosa keeps the “surprise” to herself and plans to reveal it all at the small, intimate ceremony but chaos ensues when her father, brother and sister start meddling the planning and things quickly spiral out of Rosa’s control.

It’s an offbeat idea for a movie and Rosa’s Wedding succeeds because of the beautiful lead performance of Candela Peña.  The early scenes do a great job depicting the reasons behind Rosa’s frustrations (her siblings are wonderfully obnoxious) while also showing she isn’t perfect herself (illustrated by the semi-fractured relationship with her grown daughter).  Peña brings the right mix of confidence and insecurity to the character and, while we may not want to do the same thing ourselves, we appreciate why she’s taking such an unexpected step in her life.

Perhaps there’s not quite enough material to last the full 97 minutes and a few elements stretch more into farce that warm-hearted comedy but Rosa’s Wedding is easy to like.  Others agree given the film earned 8 Goya Award nominations (the Spanish equivalent the Oscars) including a nod for best picture.  Check it out.