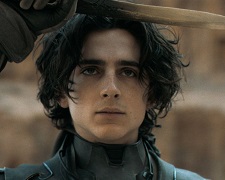 When it comes to remakes and reboots, Hollywood has a natural tendency to stick what works. From comic book adaptations like Spider-Man, to dramas-turned-musicals like A Star is Born, to action-fests like King Kong, to period piece dramas like Little Women, to like-action transfers like Beauty and the Beast, to slasher-thrillers like Halloween, to iconic Westerns like True Grit. The rationale is obvious – if it’s made money before, there’s a good chance it’ll make money again.

Dune goes against the grain. Yes, it’s based on the best-selling 1965 science-fiction novel from author Frank Herbert but when first adapted for the screen in 1984, it was both a critical and financial failure. America’s two leading film critics of the time, Gene Siskel and Roger Ebert, described it as “the biggest disappointment of the year” and “needlessly complicated”. It made just $30 million USD at the local box-office (below its budget) and even director David Lynch admitted it was “a total failure”.

The most noticeable difference in this new adaptation from French-Canadian director Denis Villeneuve (Prisoners, Arrival) is that it’s a two-parter with the second instalment slated for release in late 2023. Having five hours to work with, as opposed to just two, provides a far greater opportunity to explore this interesting world and flesh out the many characters within it. Utilising the latest technology in terms of both visual and sound effects also provides a leg-up over its cheaper-looking predecessor.

The plot is hard to surmise succinctly but to do my best, Dune is a multi-way power struggle set in the distant future (the year 10191 to be precise). The desert planet of Arrakis contains the most valuable substance in the universe – a “spice” used as fuel for interstellar travel. Three key groups are looking to control it – the alliance-building House Atredies, the villainous House Harkonnen, and the native population of Freman. Oh, I should mention the planet is also home to some giant, people-eating worms!

Whilst the film boasts one of the largest big-name casts of the year, this is Timothée Chalamet’s show. He’s front and centre throughout and his impassioned, note-perfect performance is the key reason why audiences will invest their emotions. He plays the stylish Paul Atreides, heir to his family’s throne and a powerful young warrior who is discovering and harnessing newfound skills, both physical and mental, that will be pivotal in deciding the future of Arrakis. Following on from his Oscar nominated performance in Call Me by Your Name and scene-stealing efforts in Little Women, I’m convinced the 25-year-old Chalamet is one of the best actors of his generation.

Villeneuve has been publicly critical of a decision made by Warner Bros. to release his film simultaneously in cinemas and HBO Max in the United States. That view could be seen as arrogant and near-sighted (given everything that’s happened with COVID) but having seen the finished product, it’s easier to see why he wants it seen in packed movie theatres.

Dune is as much an experience as it is a movie – an orgy of immersive visuals, music and sound that pull you into its enthralling world. I bought my first Hans Zimmer soundtrack three decades ago (Backdraft) and Dune will be the next addition to the collection. The 64-year-old composer is the master of adrenalin-pumping scores (Interstellar is a masterpiece) and this is another beauty. Australian cinematographer Greig Fraser (Lion) also deserves a shout-out for the distinctive contrasts he creates (interior v. exterior shots) and the use of tight facial close-ups in pivotal scenes. It resembles a poetic Terrence Malick film in places.