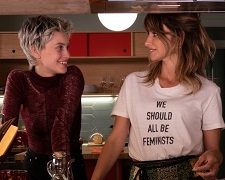 Two heavily pregnant women share a room in the maternity ward of a Spanish hospital.  The paths leading them to that spot have been decidedly different.  Janis (Cruz) is a 39-year-old fashion photographer who, having had a short fling with a work colleague, is excited to become a mother for the first time.  Ana (Smit) is an apprehensive teenager who doesn’t believe she has the skills and finances to care for a child, the unwanted result of a one-night stand.

Directed by acclaimed filmmaker Pedro Almodóvar (Talk to Her, All About My Mother), Parallel Mothers is the kind of movie you’d expect from him – a female-centric drama with a few twists.  Janis and Ana exchange phone numbers at the hospital and the film is centred around key moments in their newfound friendship in the year that follows.  The pair become close and while there are things they reveal, other things are kept hidden.

I’ll forever be a fan of Almodóvar’s work (just seeing the words “un film de Almodóvar” is exciting) but this is one of his weaker efforts.  Very obvious hints are splashed around in the opening act and so when the film does reveal its true dramatic nature, many be surprised by the lack of surprise.  I’ve also a few concerns about the semi-contrived nature of certain events which are necessary to push the storyline in a direction that doesn’t always seem like the right fit.

All of that said, Parallel Mothers is redeemed by a terrific subplot, not connected to the babies, where Janis secures archaeological support to exhume a mass grave in her town which dates back to 1936 and the Spanish Civil War.  It contains the remains of her great grandfather and she would like to provide him with a proper burial.  There are some heartfelt moments when townsfolk open up about their past and the mental wounds carried forward by their families over the past century. 89-year-old Julieta Serrano gets a fleeting amount of screen time but is extremely moving as Janis’s elderly aunt.

Penelope Cruz, collaborating with Pedro Almodóvar for the seventh time, relishes the chance to play a character consumed by turmoil.  She doesn’t express every thought but you know what she’s thinking.  Cruz has picked up several prizes already over the current awards season, including the best actress gong at the Venice Film Festival, and is a decent shot of earning an Oscar nomination next month.  She’s good.  I only wish the script was a little better.