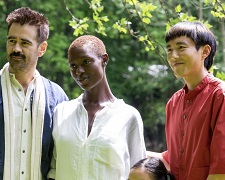 Movies about robots and artificial intelligence are not new but After Yang takes interesting ideas and weaves them together into something emotional and thought-provoking.  Writer-director Kogonada doesn’t waste time (and money) exploring the intricate details of this futuristic world.  Rather, it’s very much a tale of family dynamics and reminding us of the intrinsic value of human connection.

The story is told from the perspective of Jake (Farrell), a middle-aged man who lives with his wife, Kyra (Turner-Smith), and 9-year-old adopted daughter, Mika (Tjandrawidjaja).  There’s one other member of the household, Yang (Min), who is described as a “techno-sapien”.  He’s an adult-sized, lifelike robot who was purchased second-hand so as to give Mika someone to play with while growing up.  Who needs a babysitter when you can get a droid instead?

The film wastes no time establishing drama.  After a fun, creative opening credits sequence, Yang’s computer core experiences a major malfunction and he is seemingly beyond repair.  As you can imagine, it’s an event which impacts the family quite deeply.  The young Mika is the hardest hit given Yang had always been a loving brother and invaluable friend.  It’s the first time she’s experienced grief of such magnitude and, as evidenced by a fight at school, she’s clearing struggling.

That said, Mika’s story in the film is secondary to that of Jake’s.  When he takes Yang to a repair store in a last ditched chance to fix him, Jake learns that inside the body is a small hard drive that retained a few seconds of memory from each day in Yang’s life.  Such devices were made illegal not long after their creation but Yang was one of the rare robots that slipped through the cracks with the technology.

Using a special pair of virtual-reality glasses, Mika is able to watch these fleeting moments of Yang’s existence of which he and his family and prominent throughout.  It raises an intriguing question.  If you had the chance to look back and relive intimate moments from earlier parts of your life, would you do it?  Is it better they remain memories and not taint your current life?  One should never live in the past after all.  Or could they be used in a positive way to remind Mika of “better” times and help him appreciate the value of what he has today?

After Yang spins off in a few more curious directions but I’ll conceal those details in the hope readers will want to see this film.  Kogonada repeatedly uses a select number of small, tight locations (house, shop, museum) and avoids wide panoramas.  Even shots in the car have a blurry backdrop!  This keeps attention/questions away from the broader world and maintains the focus on the life and changing emotions of the family members.

Based on a 2016 short story published by American author Alexander Weinstein, After Yang is a cross between Ordinary People and Black Mirror.  Works for me!