Review: After Ever Happy 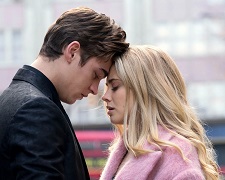 A cinema manager told me 20 years ago – “no matter how much you hate a movie, there’s always someone out there who will like it.”  When it comes to my thoughts on the fast-moving After franchise, that statement has never felt more appropriate.  I loathed the 2019 original, I had similar thoughts about the 2020 follow-up, and I didn’t even watch the 2021 instalment (it went straight to streaming).

And yet, here we are with a fourth movie in as many years.  What began in 2014 as a trashy book inspired by One Direction fan fiction, has now become a moderately successful movie series.  It hasn’t set the box-office alight but its devoted supporters, largely female teenagers as evidenced by its Teen Choice Award win in 2019, have done enough to keep it going.

You may think I was biased going into After Ever Happy but I kept an open mind and hoped, with more experience under their belts, the cast and crew would have improved.  That wasn’t the case.  They’re sticking to what they do best – storylines that look stolen from a trashy daytime soapie and dialogue so cringeworthy that your eyeballs will be sore from rolling.  There’s a proven, established audience for this… but I’m not part of it.

If you’re new to the material, it’s about the on-again, off-again romance between the well-meaning Tessa (Langford) and the “guy from the wrong side of the tracks” Hardin (Tiffin).  Time keeps passing and yet these two cannot decide if they want to be together.  They’ll split up over something trivial (such as a misconstrued jealousy) and then get back together because of a dramatic event (such as a family member passing away).

Drawing from the novel by Anna Todd, After Ever Happy is more of the same.  The way we think about these characters during the closing credits is exactly the same as during the opening credits.  There’s no meaningful arc to the two lead protagonists, the supporting cast offer next-to-nothing, and the storyline is likely to fade from memory within hours of leaving the cinema.  It’s a franchise on life support – completely void of surprises and new ideas.

The cliff-hanger (if you can call it that) ending alludes to a fifth movie which we’re likely to see around this time next year.  I applaud the studio executives for getting fans to come back each year but even the most passionate of After devotees must realise they’re being played with by this point.  It’s tired, lazy filmmaking.