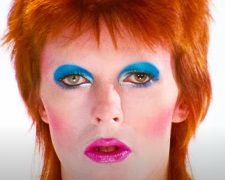 The first thing that strikes you about Moonage Daydream is how different it is from other biopics and docos about famous musicians.  It would fit into the documentary genre but its style is anything but traditional.  There are no current day interviews where friends and colleagues tell us how great David Bowie was.  There is no high-profile narrator telling us what to think and filling in gaps where footage doesn’t exist.  There is no desire to show events in chronological order with the film jumping back and forth between parts of Bowie’s life.

I like this line from director Brett Morgen - “If you can put it in a book, I don’t want it in my films.”  Morgen doesn’t want his film to be a history lesson that people could just as easily read about on Wikipedia.  He wanted to provide audiences with a wild, uplifting “experience” and capture the essence of the late David Bowie through the mediums of sight and sound.  You can appreciate this as a devoted, long-time Bowie fan, or as a relative newcomer to his artistic endeavours and fascinating life.

Having earned the trust of the Bowie estate, Morgen was given access to over 5 million assets including artworks, photos, writings, interview clips, performance footage, and other behind-the-scenes material.  From conception to execution, it was a project that took roughly 7 years.  A decent chunk of that time was spent going through the previously unseen material to see what might be of use.  It’s a staggering achievement to condense it all into a 140-minute movie.

Described as someone who “never seems to stand still”, the David Bowie we discover (or perhaps rediscover) in Morgen’s documentary is full of creativity and philosophical insight.  He speaks of spiritual forces, differing personalities, the balance between love and art, and the meaning of life.  All of it provides an understanding of who Bowie was and what mark he wanted to leave on society.  It’s clear from old interviews that many television hosts couldn’t wrap their heads around his going-against-the-grain nature.

Moonage Daydream is chaotic at times (fitting with Bowie’s persona) and it may take multiple views to fully appreciate and digest all that it offers.  As it nears its climax however, it’s easy to see the themes coming together and you’ll see it as an inspiring movie that makes you feel better about the world.  It’s been over 6 years since Bowie’s passing but Morgen’s film will play a small part in ensuring his worthy legacy endures.