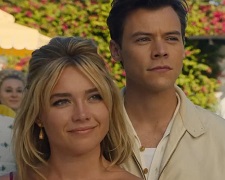 The opening act of Don’t Worry Darling creates a scenario oozing with promise and possibilities.  Oscar nominee Florence Pugh (Little Women) and musician-turned-actor Harry Styles (Dunkirk) play Alice and Jack – a happily married couple who go about their days with a sense of idyllic simplicity.  It’s the same for everyone in this small, remote community made famous for its comforting “desert air”.  The husbands leave for work at the same time every morning and the wives, after a wave/kiss goodbye from the front lawn, return to the house and fulfil their daily chores (with time for exercise as well).

As the audience, we know something is amiss.  It’s likely to prompt recollections from other films and television shows.  Everything about the curiously named “Victory Town” seems fake and old-fashioned which brought back memories of Pleasantville.  Alice is told she isn’t allowed to go beyond the town’s desert-laden borders which gives off vibes from The Truman Show.  The way in which all women are non-questioning and naively subservient to their working husbands feels inspired by The Stepford Wives.

Alice becomes our investigatory eyes and ears as she finally catches onto the fact that not everything is what it seems in Victory Town.  Some of her questions stem from the physical (unexplained earthquakes, missing people) while others arise from the psychological (weird hallucinations, a song stuck in her head).  The town’s pseudo-mayor (Chris Pine) downplays Alice’s concerns but the genie is out of the bottle and, whether her suspicions are right or not, she’s not going to stop until answers are provided.

Sadly, the early intrigue established by screenwriter Katie Silberman and Olivia Wilde (Booksmart) fizzles away in the later stages.  It gets bogged down with repetitive sequences where a paranoia-filled Alice continually butts heads with those around her.  When the true nature of everything is finally revealed (it’s not until very late), the film goes into hyperdrive and is forced to wrap up its many subplots in a rushed manner.  A quicker second act and a more patient closing act would have served this concept better.

As a positive, the film does remind us of the acting prowess of 26-year-old star Florence Pugh.  She’s front and centre throughout and she creates a character who you want to see find peace and happiness.  This struck me most as the closing credits started to roll (without giving anything away).  It’s a shame the supporting players are developed as fulsomely.  We don’t spend anywhere near enough time with them (with particular emphasis on Gemma Chan’s character) to understand their motivations.

Serving up a climax which is easy to poke holes through, Don’t Worry Darling doesn’t quite live up to its potential.