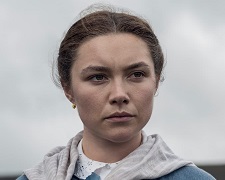 Arthur Miller’s The Crucible is an iconic 17th Century play which taps into themes of honour, integrity and hysteria.  It depicts a world where faith and beliefs carry more weight than science and factual evidence.  One might think today’s world is a more sensible, enlightened place but that’s not always the case and novelist Emma Donoghue (Room) has expressed an interest in “how idealistic young people can get caught up in all sorts of systems of extreme belief, whether it's cults or whether it's suicide bombers.”

While it’s not quite a current day tale, this thought process helped inspire The Wonder, an 1862 story set in a small Irish village and loosely inspired by actual events.  Donoghue’s book was first published in 2016 and she subsequently teamed up with British screenwriter Alice Birch (Mothering Sunday) and acclaimed Chilean director Sebastián Lelio (Gloria, A Fantastic Woman) in adapting it for the big screen.  As we’re seeing with other potential “awards season” contenders, it’s receiving a short cinema run before its upcoming release on Netflix (you can stream it in two weeks).

The film is centred around Anna O’Donnell (Cassidy), an 11-year-old who has become a “sensation” within the community because she hasn’t eaten a single parcel of food in four months and yet is in perfect health.  She proclaims that she doesn’t need to eat as she’s from a devout Catholic family and has been provided with “manna from heaven”.  Her story has been met with a mix of amazement and scepticism.  Some believe she’s doing God’s work while others believe it’s part of an elaborate hoax to earn attention.

A committee has been set up to verify the claims and they’ve engaged a widowed nurse (Pugh) and an elderly nun to supervise Anna on a continual basis for two full weeks to ensure she does not consume any food.  Her role is simply to “watch” but the nurse, going against the wishes of the committee, takes it upon herself to be a part-time investigator.  She speaks with an inquiring journalist, she interacts with the family, and she becomes close with the girl at the centre of it all.

Continuing his strong track record, Lelio keeps audiences on their toes with a few directorial curveballs – best illustrated by the film’s introductory scene which breaks the fourth wall.  Florence Pugh (Little Women) reconfirms she’s one of the best in the business by delivering her lines with confidence and conviction.  She’s a worthy protagonist to root for – when told not to do something, she quickly becomes suspicious and does the opposite.

The Wonder is an interesting, well-assembled period piece.  The opening suggests intrigue, the middle offers meaningful character development, and the finale provides food for thought.