Review: On the Line 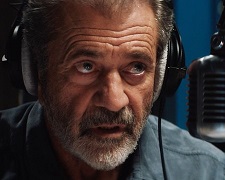 Elvis Cooney (Gibson) has forged a long, successful, colourful career within radio industry.  He currently has the midnight shift at a high-rating station in Los Angeles and his brand is to be controversial and “tell it like it is”.  A major part of his segment is talkback where callers cathartically open-up about their problems and Elvis responds with blunt, succinct advice.  Helping produce the show are Mary (Seror-O’Neill), an experienced operator who screen calls, and Dylan (Moseley), an intern on his first day at the station.

The above is covered is a short, succinct introduction before On the Line gets to its main hook.  A man named Gary calls through, is put live on air, and tells listeners that he has kidnapped Elvis’s wife and daughter.  His motives are linked to the mistreatment of his girlfriend who formally worked at the radio station.  Elvis initially thinks it is a sick prank but it doesn’t take long for Gary to prove his seriousness and put forward his list of equally serious demands.

I’m the first to admit this doesn’t always make sense… but French writer-director Romuald Boulanger did enough to keep me engaged and interested in the characters’ fate.  It moves at a swift pace, it doesn’t muck around with unnecessary subplots, and Mel Gibson creates an interesting antihero with his lead performance.  He’s not the most likeable person (illustrated by an early scene where he plays an over-the-top joke on the intern) but you’ll cheer for him nevertheless as he tries to outsmart the aggrieved Gary.

There’s another reason I enjoyed the film but it’s hard to articulate as it relates to the finale.  Not everyone will be a fan but it worked for me.  Let’s just leave it at that and hopefully my cryptic comment will make sense to those who see the film.  The trailers and marketing material give On the Line a trashy B-grade vibe and while that’s true in places, it’s also an entertaining action-thriller.  Grab some popcorn and enjoy.