Review: Not Suitable For Children 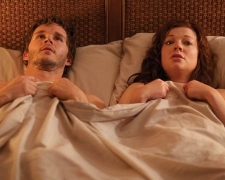 Jonah (Kwanten) is a twenty-something-year-old guy with a relaxed, happy-go-lucky lifestyle.  He lives with two of his best friends, Gus (Corr) and Stevie (Snook), in a nice house in Sydney’s inner-west.

Instead of finding themselves a normal job, these three have come up with a more unorthodox way of paying the bills.  On weekends, they turn their house into “party central”.  They collect a cover charge at the front door and then let everyone socialise until the wee hours of the morning.  There’s alcohol, there’s a DJ and it’s plenty of fun.

I acknowledge this is, for the most part, a comedy but it’s hard to buy such an implausible situation.  How do they continually host loud parties that involve people drinking on the sidewalk?  Wouldn’t a sleep-deprived neighbour be on the phone to the police?

Moving on… and Jonah’s life takes an unexpected twist when he learns that he has testicular cancer.  The doctor breaks it to him gently in that’s one of the best forms of cancer to get.  The surgeon can simply remove the testicle and after a few weeks of chemotherapy (which doesn’t involve him losing his hair), everything should be fine.  There’s little risk of it spreading elsewhere.

There’s a catch however.  After the chemotherapy, Jonah will become infertile.  He’ll have no chance of fathering a child of his own.  In case you’re wondering why he doesn’t make a “deposit” at the local sperm bank – it’s an option that’s eliminated early in the film.  He gives it a try but it seems his sperm isn’t powerful enough to survive the freezing process.

It leaves Jonah at a strange crossroad in his life.  Instead of accepting reality or opening his mind to the idea of adoption down the track, he is convinced that he must father a child before it’s too late.  He winds up on a bizarre quest of tracking down ex-girlfriends and talking to “friends of friends” to find someone who can carry his child.

Not Suitable For Children has its fair share of genuine laughs but it’s the overall story that holds it back.  The writers have tried too hard to fit these likeable characters into this strange, drawn-out premise.  Jonah’s sudden transformation from a party-loving playboy to a sensitive wanna-be dad is tough to believe.  Further, there are revelations in the film’s final act that left me thinking “well, why didn’t they think of that earlier?”  The idea of a comedy revolving around the “having kids before it is too late” argument was better handled in last month’s Friends With Kids.

There is a reason to see this movie however and her name is Sarah Snook.  The lure of Ryan Kwanten (True Blood, Red Hill) will help get people into cinemas but it’s the performance of Snook that you’ll remember as you leave the theatre.  She plays a strong, opinionated woman with a wonderfully sarcastic sense of humour.  Snook steals the film, particularly in the later stages, and shares some terrific one-on-one conversations with Kwanten.  I will follow her future endeavours with great interest.

Selected to open the 2012 Sydney Film Festival, Not Suitable For Children now finds itself in cinemas across Australia and in a “David versus Goliath” battle against Hollywood’s big summer blockbusters – The Amazing Spider-Man, Ted, Snow White & The Huntsman and Brave.  As a supporter of the local film industry, I hope it isn’t left flattened on the canvas after the first round.  It deserves better than that.

You can read my interview with star Sarah Snook by clicking here.