Review: And If We All Lived Together 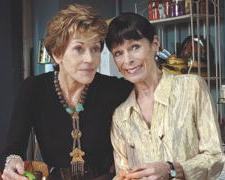 One of the success stories of the year at the Australian box-office was The Best Exotic Marigold Hotel.  It spent 14 weeks inside the top 20 and finished with a total take exceeding $21m.  You only see that kind of longevity from a film if it has very strong word of mouth.  The last movie to spend that much time in Aussie cinemas was Red Dog – released back in August 2011.

So it seems that everyone loved The Best Exotic Marigold Hotel.  Well, everyone except me.  I struggled with the stereotypical characters and the way everything wrapped up so neatly at the end.  It felt like I was being smothered with happiness!  I prefer my feel-good moments in smaller doses.

Before you start doubting my credibility as a critic (as I do each day), allow me the chance to defend myself.  I only need to present one exhibit – the French film And If We All Lived Together.  It covers similar themes but does so in a more credible manner.

The story centres on 5 elderly people from 3 different households.  They realised that they’ve reached their “twilight” years but they’re struggling to work out how they will cope moving forward.  Albert (Richard) is showing the early signs of dementia.  Jeanne (Fonda) is battling cancer and has refused further treatment.  Claude (Rich) is worried about fulfilling his sex drive.  Annie (Chaplin) wishes her children and grandchildren would visit more often.  Jean (Bedos) has time on his hands but doesn’t know what to do with it.

When some are faced with the prospect of moving into an aged care facility, these 5 friends come up with different idea.  The title gives it away - they decide to move in together.  They can share the responsibilities of cooking and maintaining the house whilst also being there for each other and providing good conversation.

They are joined by a young college student, Dirk (Brühl), who wishes to monitor their activities as part of an ethnology thesis.  He is curious about whether their idea of living together may become an increasing trend, especially given France’s aging population.

This could have been a deep, depressing film but director Stéphane Robelin has kept things light… and it works.  Yes, there’s a dramatic undercurrent (some don’t have long to live) but there are plenty of light-hearted moments that push the film in a comedic direction.  Many of these revolve around the characters discussing their sex lives, both now and in the past, and are likely to leave you smiling.

You’ll grow to like the cast quite quickly and there’s one actor who adds a little star power – Jane Fonda.  The Academy Award winner (Klute) can speak fluent French but this is the first time she’s appeared in a French film since 1972.  She’s only made 4 movies over the past 20 years and it’s nice to see her on screen again.

I don’t think too much of the title (surely they could have come up with something more interesting) but if you’re keen on avoiding the plethora of Hollywood blockbusters that are currently screening, And If We All Lived Together should be just the ticket.