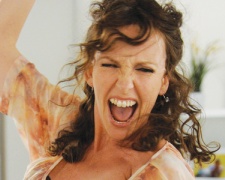 Released back in 1994, Muriel’s Wedding was a life-changing film for two people – star Toni Collette and director PJ Hogan.  For Collette, who was just 22 years old at the time, the role earned her a Golden Globe nomination and helped launch her international career.  She’s now one of Australia’s most recognisable actors with close to 50 credits to her name.  She took home an Emmy for The United States of Tara and earned an Oscar nomination for The Sixth Sense.

The success of Muriel’s Wedding was also a big confident booster for the Brisbane-born PJ Hogan.  Funding bodies in Australia weren’t too keen on his script and it took the faith of French investors to get the film off the ground.  It’s ironic given that it’s now become one of Australia’s most well-known movies.  Hogan then escaped to Hollywood where he directed My Best Friend’s Wedding (one of my all-time favourite romantic comedies) and a live action version of Peter Pan (with a $100m budget).

It’s taken almost two decades but finally, Collette and Hogan have collaborated once again.  Mental is set in the fictitious beachside suburb of Dolphin Heads – a nice touch given that Muriel’s Wedding took place in the similarly named Porpoise Spit.  The film opens with Shirley Moochmore (Gibney) dancing her backyard while belting out the lyrics to “The Hills Are Alive” from The Sound of Music.  She doesn’t care that the neighbours are watching.  She just wants her family to be like the Von Trapps.

Shirley’s five daughters couldn’t be more embarrassed.  Coral, Jane, Leanne, Kayleen and Michelle have all hidden themselves inside the house.  This is just another “incident” that will contribute the family’s reputation as being a group of lunatics.  It’s also part of the reason why Shirley’s husband, Barry (LaPaglia), never comes home any more.  He’s in the middle of a mayoral election campaign and would rather not be associating with his socially outcast family.

After a few more bizarre events, it is decided that Shirley will spend some time in the local mental institution and get a better grasp on reality.  The self-centred Barry doesn’t want this to derail his mayoral re-election and so the official word is that his wife is “holidaying in Wollongong”.  He instructs his daughters to tell everyone the same thing.

The catch is that Barry now needs a permanent babysitter.  He doesn’t have the time or the patience to look after his five annoying children.  Instead of going through the normal process of finding a qualified carer, Barry picks up a hitchhiker by the side of the road.  Her name is Shaz (Collette) and her belongings include a knife, a bong and an angry dog called Ripper.

It’s a plot that must sound bat-shit crazy, right?  This stuff doesn’t happen in real life, right?  This is like one of those zany, silly Hollywood comedies, right?  Wrong!  This is a story based on actual events!  PJ Hogan’s mother was institutionalised when he was 12-years-old and his father (who was running in the mayoral elections) recruited an unknown hitchhiker, complete with a growling dog, to take care of the family.

The path taken by Hogan is to transform this tale into a black comedy.  It’s a decision that has divided audiences so far.  I’ve spoken to a few detractors who have been puzzled by the messy premise and been insulted by the film’s comedic approach towards mental illness.  Is it appropriate to be making jokes about rape, depression and suicide?

Hogan’s approach was again, drawn from his upbringing.  He has acknowledged a history of mental illness within his extended family and in his experience, laughter has been the best medicine.  If you're easily offended, it's perhaps best to steer clear.  On the flip side, if you are willing to go along with the darker comedy, the outrageous nature of many scenes will leave you laughing openly.

Mental’s not-so-subtle message is neatly articulated by Shaz – “there’s no such thing as normal, just different shades of mental.”  She is always encouraging the five Moochmore girls to embrace who they are and not bow to the conventions that are placed on them by society.  It seems like a fairly straight forward mantra but I enjoyed watching the complications thrown up late in the film when Shaz’s true character is revealed.

Toni Collette headlines a wonderful group of performances from the predominantly female cast.  18-year-old Lilly Sullivan is terrific as Coral, the oldest of the Moochmore girls.  She does a nice job illustrating her character’s insecurities and it’s hard to believe this is her first acting role.  It’s Deborah Mailman (The Sapphires) who earns the most laughs though with her scene-stealing supporting performance as an old friend of Shaz.

The film isn’t without its flaws and it’s the male characters who heavily contribute towards this fact.  Barry’s election campaign doesn’t make a lot of sense.  I also struggled to keep up with the hot-and-cold relationship he shares with his children.  Liev Schreiber plays the owner of a travelling shark show – an odd subplot that doesn’t come together as cleanly as it should.

It’s been an interesting month for Australian films at our local box-office.  Kath & Kimderella has been immensely popular while Bait 3D has been an epic failure.  How will Mental fare?  I hope it’s a big hit.

You can read my interview with star Toni Collette by clicking here.