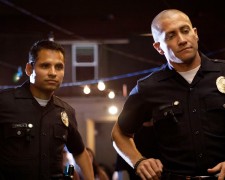 The early stages of End Of Watch reminded me of an episode of Cops.  We’re following around two police officers, Brian (Gyllenhaal) and Mike (Pena), as they uphold the law on the streets of Los Angeles.  We see the action from an array of carefully placed cameras that create the feel of a documentary.  There are cameras attached to their shirts and affixed to their car.  Brian even has a handheld camera that he’s carrying around as a training development tool.

These guys aren’t on simple traffic duty.  They’re two of the best within the LAPD and they often find themselves in situations that are either sickening or life threatening.  In the film’s very first scene, Brian and Mike are involved in a high speed pursuit of a stolen vehicle and are fired at repeatedly.  They are forced to return fire and it prompts an internal investigation as to whether their actions were justified.

Writer-director David Ayer (Training Day, The Fast And The Furious) tries to elevate this above a Cops-type show by delving into the personal lives of both Brian and Mike.  There are numerous sequences where they sit in their car and talk about marriage, kids and their plans for the future.

There’s a nice moment where Brian has met a great girl (Kendrick) but is trying to figure out whether she’s “the one”.  Mike offers a fitting piece of advice passed down from his grandmother.  He tells Brian to ask himself the question – could he live the rest of life without her?

The reason for showing us this interaction is to illustrate the close bond that has formed between Brian and Mike.  As a police officer working in the field, you need someone alongside you who can be trusted.  These two have come from very different backgrounds but it’s clear they’ve worked together for a long time and are a good fit.

The “villains” in this film aren’t very well defined but they’re engaged in some kind of drug trafficking operation.  They’re not the brightest bunch and why they’re carrying around their own video cameras is a mystery to me.  We get a glimpse of them from time-to-time and see that they’re doing their best to evade the authorities.  Part of me thinks the film would work better if we didn’t know what plans were being hatched by these bad guys.  It would have added more suspense.

It took me a while to warm to these characters but eventually they pulled me into the story.  Jake Gyllenhaal (Donnie Darko, Zodiac) has fun with his mischievous persona but it’s Michael Pena (Crash, The Lincoln Lawyer) who impressed me most as his strong-willed, level-headed partner.  You’ll believe that they’re officers of the LAPD.  Fans of Anna Kendrick (Up In The Air) will be disappointed as she has little screen time and doesn’t do much else except smile, giggle and laugh.

The story is nothing new and the mix of cameras doesn’t always make sense (didn’t know who was holding them when we see both Brian and Mike in the field) but this is still a solid action-drama that takes us inside the world of two likeable police officers and highlights the risks they face.