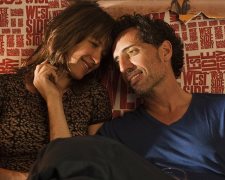 About 30 minutes into this film, a person sitting behind me in the cinema whispered to their friend – “this is like watching Abbott and Costello”. I was thinking more along the lines of The Three Stooges but you can probably see the point I’m trying to make – Happiness Never Comes Alone is a light-hearted French film that tries to blend romance with slapstick comedy.

Sacha (Elmaleh) is a casual, laidback musician who likes having fun. By day, he writes jingles for a major advertising company. When asked if he’s done anything memorable, Sacha responds by saying he wrote a split-second piece that plays at train stations over the loudspeakers before announcements are made (in other words, not all that memorable). By night, he’s a pianist at a local jazz club. He turns up, has a few drinks and charms the beautiful women with his gifted fingers (I’m talking about his piano skills).

Sacha is happy with the path he’s taken in life but the arrival of the much older Charlotte (Marceau) will leave him thinking otherwise. The two meet in a scene that can only be described as a humorous farce. Both are leaving work and in pouring rain, they bump into each other on street. Charlotte stumbles (high heels are to blame) and falls into a puddle. On getting up, she tries to salvage the situation but is immediately engulfed in a wave of water as a speeding car drives through the same puddle. Sacha offers her a lift home in his rusty convertible and the saturated Charlotte decides to accept.

There’s an obvious connection between them. If you can’t tell from the look in the eyes, things should click when you see them engage in an exhausting, all-night love making session. It’s not until they’ve fallen for each other when a few interesting truths are revealed – Charlotte is the ex-wife of Sacha’s egotistical boss and she already has three children.

It’s a recipe for trouble and the rest of the film explores their up-and-down relationship. Sacha gets on beautifully well with Charlotte’s kids but is this where he wants to go with his life? What about his plans to create a stage show and travel the world? Should he put these goals on the backburner and take a chance on a woman he has only just met?

We’ve seen this story time-and-time again but there’s a nice chemistry between stars Gad Elmaleh and Sophie Marceau that makes it easy to watch. The slapstick style of comedy used by writer-director James Huth also gives the film a point of differentiation from a regular French rom-com. The goofy, unexpected laughs caught many by surprise at the preview screening I attended.

I’m not quite sure about the abrupt note on which the film decides to end (one subplot in particular was left open-ended) but as one of the more popular releases to come out of the recent French Film Festival here in Australia, Happiness Never Comes Alone can now be enjoyed by a wider audience.