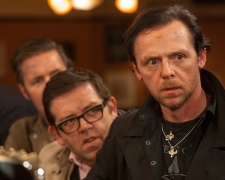 Unknown a decade ago, the film world is now very familiar with the names Edgar Wright and Simon Pegg. They created the cult hit Shaun Of The Dead in 2004 and followed that up with the equally amusing Hot Fuzz in 2007. After branching out on a few different projects (Wright directed Scott Pilgrim Vs. The World and Pegg starred in a bunch of films), this creative duo have reunited in time for The World’s End.

The story begins in the year 1990 with five teenagers setting out on an epic pub crawl through the small town of Newton Haven. Guided by a map, they hope to finish a pint at the 12 pubs that make up the infamous “Golden Mile”. They didn’t stand a chance. Things were getting wobbly by the time they arrived at the 5th pub and the night came to a messy end shortly after.

We now slip forward to the current day and see that these five guys have all grown up and gone their separate ways. They’ve got wives, kids, jobs, mortgages. Well, all of them except for Gary (Pegg). He still lives with his mother in Newton Haven and clings to the memory of that fateful evening, describing it as “the best night of his life”.

Shaun Of The Dead and Hot Fuzz offered some goofy laughs but The World’s End is a much darker offering from Edgar Wright and Simon Pegg. Gary is a sad, lonely human being. He’s a forty-something year old who never grew up. He parties hard, he drinks heavily and never takes any responsibility. In fact, he still drives around in the same rundown car that he’s had since he was 17. Even the music in the tape deck is the same!

Forever stuck in the past, Gary gets in touch with his four old friends and puts forward a proposal – let’s all get together in Newton Haven for a catch up and see if we can finally complete the Golden Mile. None of them are really that keen. Andrew (Frost) sums it up best when he tells Gary – “you remember the Friday nights, I remember the Monday mornings.” In the end, they’re all guilt-tripped into going along after Gary reveals that he’s been having a tough time since his mother recently passed away.

The early scenes are tough to watch – not because of the gloomier material but because Gary is such a selfish, obnoxious, irritating character! Many of us will be able to relate to the pain that his friends are going through. There’s often a sense of intrigue when first meeting up with an old chum who you haven’t seen in years… but then after a few minutes, you quickly realise why you haven’t stayed in touch – you’re now very different people.

If you’ve seen the trailer or advertisements, you’ll know where the film is heading next. What begins as the story of an alcoholic trying to reconnect with old friends… becomes a science fiction adventure where an alien race starts inhabiting the bodies of humans to make us better people. The sudden twist in genre reminded me of Robert Rodriquez’s From Dusk Till Dawn (released back in 1996).

It’s this second half of The World’s End that audiences will enjoy most. The crazy scenario provides an opportunity for Simon Pegg, Nick Frost and the rest of the cast to showcase their comedic talents. I don’t think it’s as funny as Shaun Of The Dead or Hot Fuzz but it’s still worth your time.

You can read my interview with director Edgar Wright by clicking here.