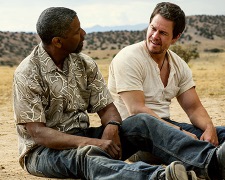 It’s hard to fault the pairing of Denzel Washington and Mark Wahlberg. If I’d written an action-based buddy comedy, I’d do everything to make sure my script found its way in front of these two guys. They’re funny, they’re charismatic and they’re cool. Oh, and they’ve also proven themselves as having huge appeal at the box-office.

They’re the strongest part of what is an interesting… but also muddling film from Icelandic director Baltasar Kormákur (Contraband). It’s based on the graphic novels by Steven Grant – a comic book writer who has worked for both Marvel and DC. Grant had carried the idea of 2 Guns for quite some time but it wasn’t until 2006 that the novel was first published by Boom! Studios.

The film begins with Bobby (Washington) and Stigman (Wahlberg) sitting in a traditional American diner in a small town. They’re not talking about news, sport or the weather. They’re talking about pulling off a robbery. The small bank directly across from the diner is rumoured to hold roughly $3 million in cash that has been laundered by an influential Mexican drug dealer. With just an old security guard at the door, it should be pretty straight forward for these two professional thieves. The plan is to be in and out within 5 minutes.

The robbery goes well. In fact, it goes a little too well. The safety deposit boxes contain not just $3 million but rather, $43 million. Despite the huge haul, they still have enough time to pack it all into the back of their Ford Bronco and flee the scene before the cops arrive. No one got hurt. There wasn’t even the need for a car chase.

Obviously, that’s not the end of it (or else it would be a very short film). It turns out Bobby is an undercover Drug Enforcement Agent (DEA) who stole the cash to bring down a major drug cartel. Further, we learn that Stigman is an undercover Naval Intelligence Officer and his superiors want to use the cash to fund the Navy’s secretive operations.

They’re not the only ones fighting over the money. We’ve also got (1) Bobby’s girlfriend (Patton) who works for the DEA, (2) Stigman’s commanding officer (Marsden) who isn’t afraid to act outside of the law, (3) the Mexican drug dealer (Olmos) who is suddenly out of pocket to the tune of $3 million, and (4) a mysterious man (Paxton) who seems to be the owner of the remaining $40 million.

It boils down to a guessing game where you try to work out “who’s playing who?” It’s fun in the sense that instead of having a traditional good versus evil story, this is more of an evil versus evil story. They’re all bad guys… it’s just some are less bad than others. It’s a noticeable point of differentiation from other action films we’ve seen in recent months.

That said, it’s tough to keep up with. There are so many characters and so many permutations that it does get messy. I didn’t know what was going on at times. Thankfully, the amusing dialogue more than compensates. The best scenes involve Washington and Wahlberg arguing and trying to get the better of each other. If you’re a fan of either actor, you’re likely to enjoy this.