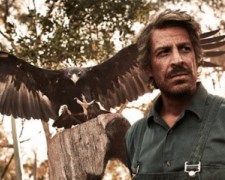 Healing is the third Australian-made feature to be released in local cinemas in as many weeks. Ordinarily, I’d say that’s good news. It’s always nice to see home-grown product getting a chance in this country. Unfortunately, the other two films struggled at the box-office. 52 Tuesdays earned just $24,000 in its first weekend. Canopy could only manage $13,000 over its first four days (I saw it in a completely empty cinema on a Friday night).

They’re not bad films. Both Canopy and 52 Tuesdays are definitely worth seeing. The problem is that (1) they’re only screening on about 10 cinemas across Australia, and (2) no one knows about them. You won’t see them advertised during Masterchef. You won’t see their posters at bus stations. You won’t see their stars being interviewed on Sunrise, The Today Show or The Project.

I say all this not to complain. I’m a realist. I don’t have a magic solution that can generate publicity for Aussie films. The point I’d like to make is that it’s important for me to talk about films like Healing. If you’d rather give it a miss and save your money for Godzilla next week, that’s fine. I just want you to know that there are alternatives, made by local filmmakers, that are as entertaining as your traditional Hollywood fare.

Healing is set in almost entirely in a rural correctional facility. It’s best described as a working farm. Prisoners perform basic tasks and try to offer some value back to the community before they are granted release.

A new inmate, Viktor Khadem (Hany), has everyone talking. He’s already spent 18 years behind bars and his stay at the correctional facility is his first step towards freedom. Viktor would prefer to stay out of trouble but that’s not going to be the case. A few prisoners have set up a small drug dealing operation and they see Viktor as a threat. A correctional officer sums up the situation best – “someone needs to have a chat to someone before something happens to someone.”

That’s not really the crux of the film though. At its heart, Healing is a story of forgiveness and rehabilitation. Viktor saves an injured falcon that became stuck in a barbed wire fence. With the approval of his correctional officer (Weaving) and a nearby animal sanctuary, he helps build an aviary that will house injured birds. They can then be nursed back to full health and released into the wild.

It’s not hard to see the metaphor here. The birds need rehabilitation but so too do the prisoners. As Viktor bonds with the injured falcon, he releases that he must also let down his guard. Having been isolated for almost two decades, the time has come to open up about his past, make peace with his son (now a 23-year-old), and prepare himself for the future.

Healing is rough around the edges. It’s trying too hard to be a warm-hearted, feel-good story. It chooses not to delve too deeply into these characters’ darker pasts and it uses a one-dimensional bad guy (played by Anthony Hayes) to create sympathy for the protagonists. It’s a little formulaic, simplistic.

I still liked this film though. It has something to say about the importance of therapy (whatever the form) and the power of forgiveness. There’s much to reflect upon when leaving the theatre. Life is complicated and too often do we try to brush aside / ignore certain problems. The central performances of Hugo Weaving (who worked with director Craig Monahan on The Interview and Peaches) and Don Hany also deserve praise.

Well, there you go. You can watch Bad Neighbours with Zac Efron and Seth Rogen. Or you can watch Healing with Don Hany and Hugo Weaving. They’re both out this week. They’re both worth a look. The choice is yours.